My experience playing Space Channel 5 Part 2 has been much like that of the awkward nerdy kid wanting to ask a cheerleader to prom in an 80s teen movie. In the film, our relatable underdog protagonist finally musters the courage to go talk to the girl with the hourglass figure and Big Ben bangs- only to, after four steps in a slow-motion shot, bump into the proverbial captain of the football team, spilling his lunch tray full of chili and cream corn onto the starting QB’s letterman jacket.

To me, the aesthetic and story of Space Channel 5 Part 2 is the bangs-y cheerleader. I gaze upon her with reverence, simply wanting to bask in her glory and appreciate her immaculate design, but as with the movie-nerd, there are seemingly insurmountable obstacles in my way. For him, he has to overcome both his inhibitions and social status, for me, I must battle with my inherent lack of rhythm and old man reflexes.

While the nerd may gain acceptance and adoration by taking off his glasses and standing up to the bully/oppressive authority figure (or doing a wicked keg stand), no amount of soul searching or inspiring speeches by best friends could grant me the strength needed to survive the more demanding segments of Space Channel 5 Part 2. The game consistently exposed my inadequacies at every turn, filling me with doubt regarding everything from my gaming abilities to my understanding and appreciation of music. And yet, I kept coming back.

The aesthetic appeal of the Space Channel 5 characters and universe is immediately apparent upon starting the game. The 1950s neo-future sci-fi motif is a creative and compelling setting and every character, from human to alien, has a humorous retro-chic look to them. The appeal of series protagonist Ulala is unquestionable as she remains one of Sega’s most memorable characters, still making occasional guest appearances in other games. In addition, the go-go-funk-electronic soundtrack is just as fresh today and blends seamlessly with the visuals.

The game makes an easy transition from Dreamcast/PS2 to HD thanks to its colorful and clean graphical style (although the CG movies don’t look too hot these days). It’s possible to play in a 4:3 viewing area with wallpaper, but the menus and gameplay translate well to widescreen, which should be acceptable to all but the most vehement purists. 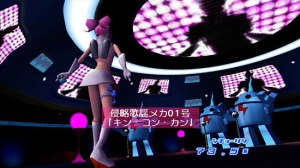 In addition to the main story, there is a non-stop mode and co-op versions of both where player one controls directional input and the second player is in charge of the “chus” and “heys.” To extend the life of the game, there are costumes to collect, online leaderboards to compete against space reporters all over the world, and of course, the requisite trophies.

This is without a doubt the best version of Space Channel 5 Part 2 available, and the game (like the original) remains engaging and compelling to me- even though my chances of mastering it are more Duckie than Blane.