While a younger generation may find this hard to believe, there was once a time a time when vampires were completely badass. Vampires didn’t exude sparkles, they exuded class. Vampires didn’t gaze longingly into the eyes of human females, they infused them with their blood and controlled them telepathically in an effort to build a vampire army to take over the world. And so on.

The most influential work of fiction in shaping the century or so of cool vampires we got was Bram Stoker’s novel Dracula. In 1992, celebrated wine-maker (and film director) Francis Ford Coppola directed a big-budget adaptation of the novel, which in turn inspired video game adaptations that appeared on everything from the Game Boy to the Amiga. Developer Traveller’s Tales (best known for their Lego <family-friendly franchise> games) certainly did not leave out Sega platforms, as the game appeared on the Game Gear, Master System, Genesis, and Sega CD.

The Master System and Game Gear versions of Dracula are, as would be expected, pretty much identical. The 8-bit versions of the game are (un?)surprisingly colorful action platformers (complete with Mario-esque “?” boxes that produce items when hit).

The character controlled by the player, Jonathan Harker, is agile (though his jumps feel a bit floaty) and the enemies, with their simplistic sprites and limited animation, are oddly charming. Aside from the occasional difficulty spikes, the game is altogether quite pleasant to play now, though pretty unremarkable at the time of its release.

Dracula for the Genesis aimed to be a bit more Castlevania-like than the 8-bit Sega releases, and it was somewhat successful at accomplishing this. The enemies look fairly menacing and the stages feel thought out on both a technical and aesthetic level, which gives the game a definite sense of personality and atmosphere. 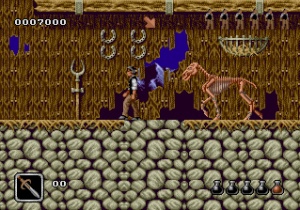 Still, neither the aesthetic, platforming, or combat really comes close to matching the quality of the Castlevania series and the poor hit detection and uneven difficulty serve to remind you that this is licensed game.

Finally, we have the Sega CD version of Dracula. The game uses digitized characters and backgrounds, which give it some terribly ugly and grainy visuals. As is the case with pretty much all games made in this style, the character movement is very stiff and awkward, and while enemies and platforming sections are sparse, simply maneuvering Harker from the beginning to the end of each level is a draining task, with the only reward being some grainy, nearly indecipherable, full motion video clips.

The game does at least have some pretty good sound design, with subtle music and some ambient background sound effects, which gives it more of a horror feel than any other version, but unfortunately does not make the game any less painful to play.

While each of the Sega versions of Bram Stoker’s Dracula are interesting in their own way, it’s hard to really recommend any of them. But if you’re a hardcore 8/16-bit Sega fan who has exhausted all the horror-themed titles the systems’ libraries have to offer, these games are intriguing curios in the history of the genre. And at least Dracula doesn’t sparkle.