Book Review – Service Games: The Rise and Fall of SEGA 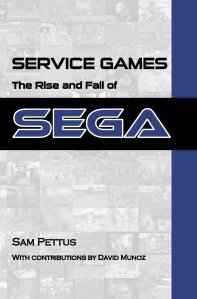 Service Games, written by Sam Pettus, bills itself as “the complete history of Sega.” In a sense, this statement is not a fabrication- the book does offer a chronological history of the company. But the book is so full of typos, factual inaccuracies, and immature, one-sided, message board poster-esque writing that it’s far from “complete.”

It’s immediately apparent that the text in Service Games never graced the eyes of an editor, as it is rife with typos and grammatical errors, such as the always-jarring misuse of it’s/its. Grammar errors and typos are certainly not unheard of in the area of video game discussion; spend a moment clicking links on this very blog and you’ll likely find some sort of embarrassing high-school English mistake. But Service Games bills itself as a more intellectual/historical text and it’s being sold for actual money; the latter of which makes these errors inexcusable.

If the typos don’t cause you to cringe, the factual inaccuracies will. Any veteran of the 16-bit wars will take issue with claims of Streets of Rage being created as a response to Capcom’s Street Fighter II (SoR was more likely meant to be Sega’s Final Fight). Inaccuracies such as this add up to dilute trust in the author, so when he revealed new-to-me trivia such as Konami’s planned version of Super Castlevania IV for the Genesis, I couldn’t fully accept it as fact.

Beyond the typos and inaccuracies in the book, what turned me off the most was the tone. This is not a book celebrating the artistic achievements of Sega games. This is a book filled with dry technical details where the only moments celebrated are Sega’s few “successful” marketing campaigns and the resulting profits. But when the book is absolutely at its worst is when the author is showing his biases. There is an incredibly bizarre section where Pettus addresses Nintendo fans. This awkward two-page rant just reeks of forum post; legitimately uncomfortable stuff.

Service Games has the foundation of a great Sega history book, but it simply has too many flaws to recommend. However, with a significant amount of new research and a rewrite, this could become an excellent guide to the company’s fascinating history.