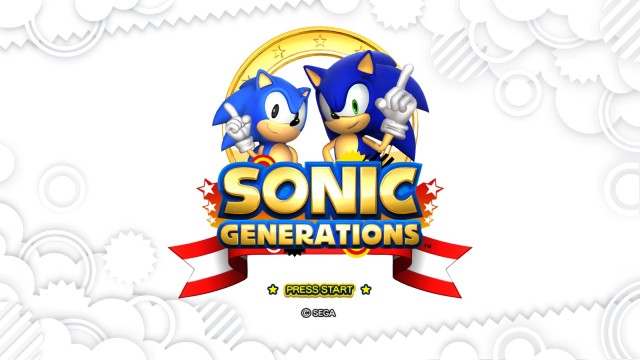 After what seems like uh… generations, I finally finished Sonic Generations. I’m not sure why it took me so long, because I really enjoyed the game, but here I am watching the credits roll on New Years Day, 2014.

The basic premise of Sonic Generations is quite nice: through some Eggman-induced dimensional travel shenanigans, the chubby, beady-eyed Sonic from the 16-bit games meets up with the lanky, chili-dog-pounding Sonic of the modern era. You play as both (classic Sonic in 2.5D side-scrolling stages and modern Sonic in 3D levels, with some overlap), which gives the game variety from the get-go.

It’s amusing to play stages from the 16-bit games in 3D and side-scrolling interpretations of the modern levels, but this is only the start of Generations’ focus on variety and nostalgia. In addition to the “main” levels, there are a slew of other activities, both optional and required, including races through stages against the “other” Sonic, “rival” battles, ring-collection challenges, and more. There is a gallery for unlockables:

and even a store where you can buy additional abilities, like enhancements for Sonic’s speed and stopping ability. 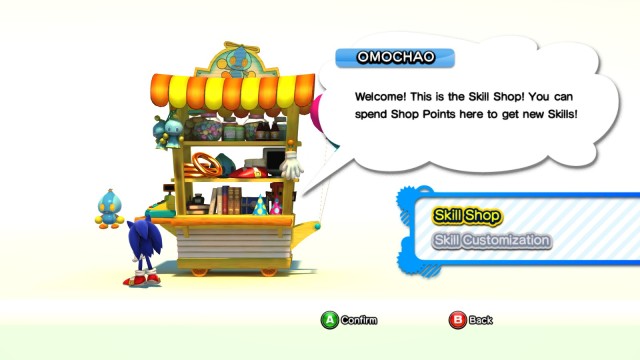 If you’re a big spender, you can also grab the Casino Nights DLC, which is a pretty intricate pinball table (leagues better than Sonic Spinball).

What all this adds up to is a game filled to the brim with content for Sonic fans of all *ahem* generations (and that’s not even considering the incredible mods created for the PC version by the community). While the game contains some of the frustrating issues you’d expect from a modern Sonic title (occasionally imprecise platforming, inaccurate lock-on/homing, sections where your control is limited, etc.), none are deal-breakers in this case.  The issues are relatively minor, and pale in comparison to the amount of joy that can be found in Generations.

In general, I’m a pretty “skip the cutscenes” type of modern Sonic player, but I found myself really enjoying them in Generations. It’s hard not to be charmed by classic and modern Sonic teaming up and going Super or two generations of Eggman arguing with each other, with the original re-evaluating the life choices he is on the path to make. The cutscenes, despite suffering from some compression artifacts, are animated well, and quite lovely to look at. Overall, Sonic Generations is a gorgeous game, running smoothly even on my modest and dated PC.

But I think what resonated with me the most about Generations was the music. The new versions of some of the themes are positively stirring for long-time fans (stand outside of Green Hill Zone in the hub to see what I mean), and while many of the remixes won’t top the originals, they are still interesting and enjoyable. And if the new versions don’t do it for you, many classic tracks are unlockable, and you can select them before entering the stage. This means you can finally play a Planet Wisp stage from Sonic Colors as classic Sonic while listening to the Emerald Hill Zone music from Sonic 2.

Sonic Generations is a fantastic voyage through the history of the character, packed with everything you love about the series, with little of the annoyances. I’m glad I finally sat down and finished the game, and am happy to report that it still holds up over two years later. In fact, I think this is a game that will be appreciated by fans in future generations as well.