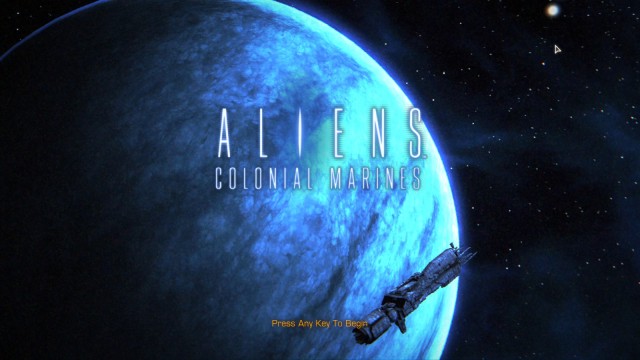 With the news today of Creative Assembly’s Alien: Isolation turning out to be a Pretty Cool Thing, I decided to give one of the Steam games in my collection a go: Aliens: Colonial Marines. OK, let me explain why I own Colonial Marines in the first place. At some point in the digital holiday sale daze, I purchased it from Amazon for $1.99. Just a few days ago I received a $5 Amazon promotional credit from the purchase, so essentially I’m being paid $3 to play the game. With that, alongside the game’s infamous reputation in the back of my mind, I dove in.

When I started the game, I was expecting (and kind of hoping for) a technical mess filled with unintentional hilarity. What I got was actually a bit worse- a mundane, unremarkable, modern first person shooter. In Aliens: Colonial Marines you do lots of modern shooter things like go down metallic corridors, find hidden-in-plain-sight dog tags, earn arbitrary ranks, put different scopes on your guns, defend squadmates while they open doors, play audio logs, but mostly you just mow down waves of aliens (and eventually, dudes).

Luckily, the shooting is decent. I mean, the bullets go where you point the mouse and all, but it’s not without some weirdness. Most notably, the sound of the guns is incredibly chintzy- emptying a clip sounds like, I dunno, spraying a hose into a tin can or something. As off-putting as the shooting sounds, it’s definitely preferable over the sound of your squadmates’ chatter. Your constantly changing squad is comprised of some of the most insufferable tough-guy stereotypes this side of, well just pick one of the top games from the last NPD top ten.

While Colonial Marines is far from “technically impressive,” it does have a few things going for it. For one, it runs pretty smoothly on my modest PC- at a consistent frame rate with few hiccups. Despite the somewhat bland surroundings, the film grain filter gives the game a unique and charming retro vibe. The load times are also remarkably quick, which was very welcome when I had to replay a defend-a-dude section half a dozen times early on.

The retro fonts are a nice touch

Colonial Marines is nowhere near as bad as I was expecting, yet it still did little to compel me to return to it. Was it worth the $3 Amazon paid me to play it? Certainly. Was it worth the two hours I spent with the game? Sure. Is it worth spending more time with? From what I’ve played, probably not. Here’s hoping that Alien: Isolation does a better job delivering on its promise.