When Sonic Lost World launched last October, reviews were… mixed. While some appreciated the soundtrack, creative stage design, and game play variety, others found the story lacking, the game too frustrating, or the new controls flawed.

I passed on Sonic Lost World when it launched, but thanks to a recent sale, I decided to pick up a copy. Since launch and the moment I slid the disc into my Wii U, a lot had happened in the Lost World. The game received a significant update, fixing some of the issues reviewers chided it for, and there has been some free DLC (with more on the way). My thoughts here are based on the post-3.0.0-patch version of the game, so keep in mind that my experience is significantly improved over that of initial reviewers. 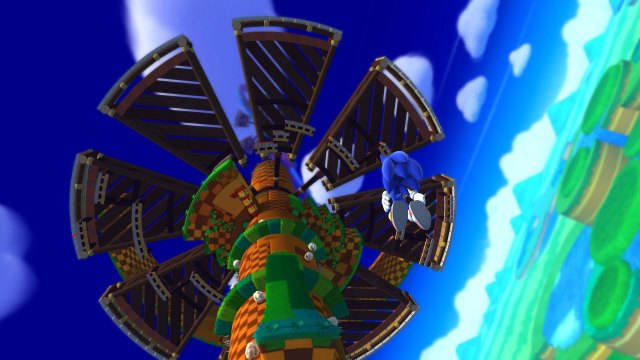 What first struck me about Sonic Lost World was the presentation. Sega’s blue-sky aesthetic is, like in the day levels of Sonic Unleashed and the majority of Generations, absolutely stunning in HD, and Lost World is no exception. It’s not the most pixels or polygons you’ve ever seen in a game, but the art design and unapologetic use of bright colors makes Lost World an absolutely brilliant visual spectacle. Thankfully, like the Blue Blur himself, Lost World runs fast and smoothly as well. The game runs at a pretty stable 60 fps, which is apparent once you see the game in motion.

With a 60fps frame rate comes the expectation of precise controls, and initially, Lost World’s controls don’t feel too great. Sonic Team tweaked everything from the way Sonic’s double jumps feel to how the spin dash is executed to, most importantly, how he runs. In Lost World, Sonic does not begin gaining momentum just by holding the analog stick in the direction you are headed. Instead, you hold the ZR trigger in addition to the analog stick when you gotta go fast. This on/off switch to running makes traversal and platforming much more manageable, but it certainly takes some getting used to. There are so many changes to the controls compared to previous 3D Sonics that Lost World has a bit of a learning curve. While the changes are all functional, they are not entirely intuitive, and took me three or four stages to get totally accustomed to. I’m not sure if this is the direction Sonic controls should go in the future, but they work in the context of Lost World, and it’s nice to see Sonic Team trying new things.

My initial impulse with cutscenes in most games is to skip them, but after finding myself pretty entertained with the story segments in Colors and Generations, I gave them a try here. The story in Lost World was obviously created with kids in mind, but it’s smart and punchy enough that total manchildren (such as myself) can get a kick out of it as well. In general, any passive story sequence in a game over a couple minutes long-no matter what the quality- makes me antsy to get back to playing. In a show of admirable restraint, Lost World kept me watching the cutscenes by keeping them, for the most part, around a minute or so in length. The story in Lost World is both silly and melodramatic, with some genuinely funny moments in between. Like in most recent Sonic titles, it can be experienced in its original Japanese if you are so inclined (which I was).

Two areas of Lost World that I feel deserve special acclaim in a celebratory paragraph are the soundtrack and stage designs. Yay! The music in Lost World is catchy, upbeat, and especially in the case of the main theme, quite memorable:

The music fits well with the themes of the stages, which definitely get pretty theme-y at times. One standout level is Dessert Ruins, which is entirely snack-themed. From the backgrounds to the paths Sonic traverses, everything in Dessert Ruins is some sort of delicious food that is totally bad for you, from donuts to licorice. As a huge fan of snack foods and the act of snacking, this stage spoke to me on a personal level. 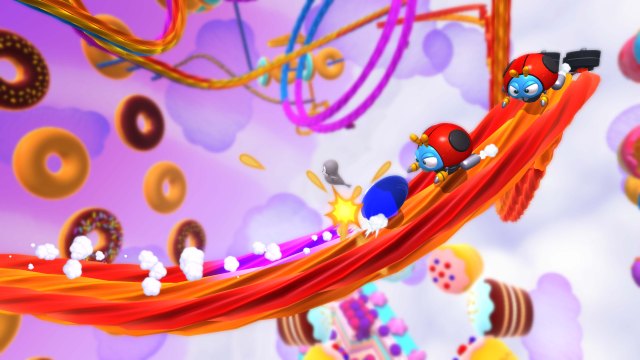 Speaking of sweet, the (FREE) Yoshi’s Island DLC is pretty great as well. It looks AMAZING and really serves to get me even more excited for Yarn Yoshi. I joked on Miiverse that this is “how video games should look.” I was, of course, being hyperbolic, but in some ways I kinda believe that sentiment- colorful, creative aesthetics in HD are so gorgeous that they provide the perfect amount of whimsical escapism- it just really appeals to me and there isn’t enough of it in the current market. ANYWAY, the Yoshi’s Island DLC is a lovingly-crafted diversion from the main game and an awesome freebie for fans.

Back to Lost World proper, it’s unfortunate that the creativity and sheer joy of the earlier worlds dwindles around the halfway point. After the delightful Tropical Coast, you’re faced with a frustrating slippery ice world followed by a series of drab and uninspired jungle/temple stages. These levels are a test of your resolve, but completing them opens the next world, Sky Road, which brings back stable movement and beautiful blue skies. However, from this point on the difficulty ramps up considerably, and I can understand why there was a chorus of reviewers at launch expressing how frustrating the game could get. I definitely appreciate that Sega increased the amount of lives you get per continue to ten in the update, but the act itself shows how problematic the difficulty spikes were.

My final completion time for Sonic Lost World was about seven hours. There is still plenty to do post-game for completionists, which I’m sure I’ll dabble in until the next piece of Nintendo crossover DLC drops (I still have the NiGHTS DLC to complete as well). Overall, Lost World frustrated as much as it amazed and in between those moments I found the game delightful and solid. As with most Sonic games, your enjoyment will depend on your affinity for the characters and aesthetic, but most of all, your patience and willingness to try, fail, and try again.