Phantasy Star Offline is a project where my goal is to complete Ver.2 on Dreamcast solo. Read about why here, week one here, and week two here.

When I last left off at the end of January, I had just reached the Ruins and was utterly defeated and broken by the difficulty. I took a PSO hiatus for a few months, but found myself compelled to return to it this weekend.

After returning to the Ruins, it was instantly apparent what the problem with my character was low defense. If I found myself surrounded, enemies could easily whittle my health bar from full down to nothing in 5 or 6 attacks. I decided to make defense my top priority, and began feeding my Mag Trimates, which increased that stat.

To combat the Dark enemies in the Ruins, I purchased a Shock Buster that was strong against them. It was a downgrade from my +20 Dim Buster, but I grabbed some grinders from my bank for it, and by the time it was +4, it was doing more damage than the Dim Buster. Now it was time to grind. 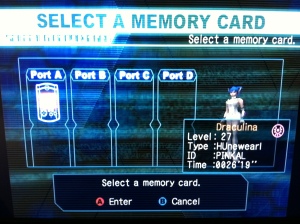 The leveling up process slowed to a crawl as I progressed deeper into the Ruins. While some enemies (Death Gunners and Delsabers) were a pain in the ass due to their moments of melee invincibility, they never felt like serious threats. However, enemies like Dark Belras, Chaos Sorcerers, and Chaos Bringers could wipe out half my HP with one attack from across the room if I wasn’t paying attention, which created some tense battles. Those battles became a lot of effort for very little XP.

Fortunately, enemies in the Ruins occasionally dropped some extremely helpful stat-boosting items. In addition to grinders, I also found a handful of HP boosters, something I desperately needed. 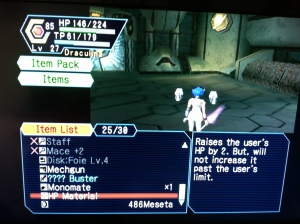 A bigger boost would come in the form of a rare shield that provided bonus defense against Dark attacks.

As I continued deeper into the Ruins, the surroundings grew more corrupted and the battles more exhausting.

I was still struggling through rooms full of standard enemies, wondering how I would ever defeat Dark Falz, when a beam of hope appeared in the form of an unknown special weapon. 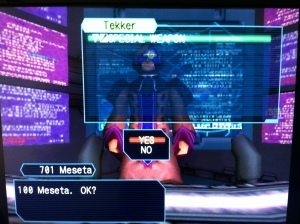 The weapon turned out to be a powerful blade known as AGITO. While it lost the extra damage against Dark effect, it had much better attack and accuracy stats than the Shock Buster. I immediately quit to save my game out of fear of losing my data (it’s been storming the past two days here, so a power outage is a real possibility).

Whether this blade will be enough to vanquish Dark Falz remains to be seen. Stay tuned for the final(?) Phantasy Star Offline post, coming soon!