The Sega Saturn was a great system with an incredible library of games. Unfortunately, many of the best games never made it to the west, or were released in limited quantities and are now prohibitively expensive. In Japan however, it’s a different story. In its prime, while the Saturn couldn’t compete directly with the Playstation, it had a solid amount of retail presence thanks to its somewhat niche library of arcade, fighting, and dating games.

And now, those games are available in used stores, and the majority of them are dirt cheap. For example, yesterday in Akihabara, I spent 6000 yen (roughly $60 USD) solely on Saturn games, and this is the haul I walked away with: 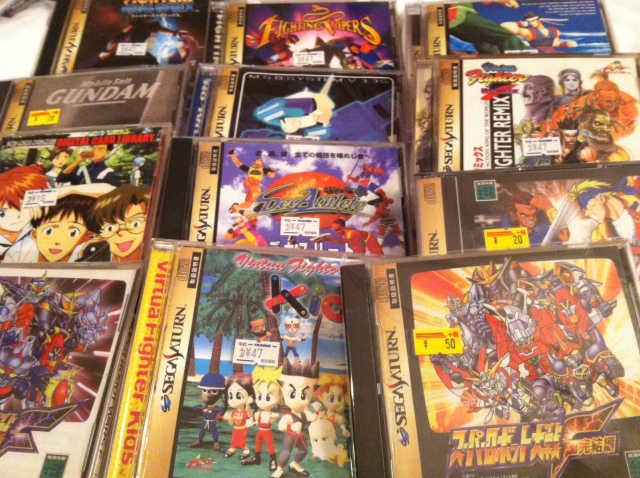 Here are the most expensive games I bought (and also the ones I felt I got the best deals on):

Stuff like Shining Force III, Rayearth, and Shining Wisdom command prices of $50 and (way) higher in North America. The language barrier is a factor, but I’ve found that I know enough Japanese to stumble through most RPGs (plus, FAQs exist). The Ogre games may be a bit tougher because the mechanics are more complex and I expect the writing is on a higher level, but they still make for nice additions to the collection. While not all of them are in *perfect* condition, the games I bought were complete with at least the original back cover and manual.

I found all of the games in a total of four shops in Akihabara – Super Potato, Trader, Friends, and the Book Off near the station. The best deals were not in the Saturn section, but rather off in corners or bins marked as “JUNK ITEM.”

Unfortunately, most Saturn consoles I saw in Japan were between 4800 and 6500 yen. With what it would cost me to ship it back to the US, I figure I’d be better off just getting a US console (about $45) and an Action Replay (about $40). My plan for getting the games back to the US cheaply is to get a CD wallet here, fill it up with the game discs, fill a small box with the manuals and back covers, and then get some jewel cases back in the US. Voila! A fun and diverse Sega Saturn collection, all for under $200!

If you have any other tips for Saturn collecting (English or Japanese games) feel free to post in the comments! :-D

3 Responses to Shopping for Sega Saturn Games in Japan