My first experience with Japanese model kit building was over a decade ago, when one day Gundam Wing models showed up at my local Toys R Us. The kits were the most basic available, but I still snatched up every one I could and completed them all. From that point on, I’d grab a Gundam kit every few years, whenever the mood struck me.

This RAcaseal kit was my first attempt at a non-Gundam model, and it was initially a bit overwhelming. 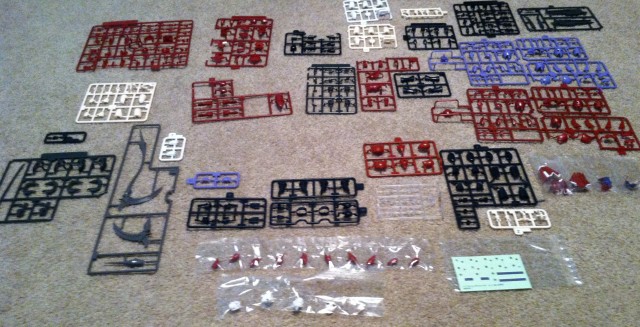 The kit contained far more pieces than I was used to working with (my Gundam building never went beyond the simple HG range). Turns out, I would use only a fraction of these pieces, but more on that later.

The instruction book was thicker than what I was used to as well.

Yet, once I started on the kit, it was remarkably simple.

Once I got to the last stage of the process, I had to make some choices. The kit included a multitude of weapons, such as handguns, a crossbow (aka shot), a sword, and a scythe. The weapon I chose would dictate the hands I needed to select (which there were about a dozen pairs of). I went back and forth on this for awhile, eventually settling on the dual handguns, because they looked fine unpainted.

The kit also contains pieces to change the height of the model.

It also includes various heads to choose from.

It was kind of like creating a character in PSO!

I ended up going with head option “29,” but I still had one more very important decision to make… Section ID!

Yes, the kit even included tiny stickers to place on the figure indicating its Section ID. I ended up choosing Viridia, for no reason in particular.

I don’t have any materials for paining or finishing, but I DO have a Gundam Marker for lining, so I touched up the figure a bit with that.

And here is the final product!

I’m pretty happy with how she turned out, especially considering she is unpainted.

The model is extremely move-able, and feels pretty sturdy when posing. However, some hand combinations fit better than others- I had trouble keeping some from falling out of her arms. Luckily, there were plenty of pairs to choose from.

The kit took me about three hours to complete (though there is definitely more I could do). Building a model is an involving, relaxing, and rewarding process. What I really liked about this kit is that it was true to the source material and allowed some creativity as well- a cool collectible worthy of the Phantasy Star name.