Neon Genesis Evangelion is my favorite anime series of all time. From the beginning to the bitter end of the series, I love it dearly. I bought VHS tapes with 2 episodes on each as they were released for $30 a pop. I ordered a VHS fansub of End of Evangelion, years before it was released officially in the west. I even wrote essays and showed clips from the series as parts of projects in my freshman year of college. Yes, I was *that* kid in your intro to psychology class.

Something that endears the series to me even more is the close partnership between Gainax and Sega during the mid to late-90s. Most of the Eva merchandise from this era has Sega branding on it, which makes it all even cooler to me. As Evangelion was in full swing, so was the Saturn (in Japan, at least), so it’s no surprise that the system ended up with some Eva games.

One of these releases was Digital Card Library. It’s essentially an Evangelion-themed minigame collection where you earn and collect “digital cards” showcasing art and animation from the series.

When you start the game, you only have a few cards and even fewer minigames to choose from. You can browse your cards, or by using the menu, jump to the minigames.

Select “minigame” here to jump to that page

The nine minigames in Digital Card Library. For the sake of simplicity, I will be referring to them in order from left to right.

In the first minigame, you need to watch the pattern of Gendo’s eyes, then repeat.

I found the game to be surprisingly difficult and kind of not fun.

What’s nice about Digital Card Library is that even if you lose in a game, you still earn cards. You can also replay games you enjoy (or are good at) to earn cards (and more minigames). So with that in mind, I tend to avoid the Gendo gaze game.

One that I did enjoy, despite its simplicity, was the second game. Here, you play as an Angel and have to destroy Eva unit 01 (and Shinji).

Three Unit 01s pop up- two generic units and one “real” 01. The “real” Unit 01 is fully painted, and that’s the one where you have to press the appropriate button on the Saturn controller to blast it. The game is just a reflex-test ala Whac-A-Mole, but it’s a simple and somewhat addicting way to earn cards. Plus, if you’re a Shinji-hater, you’ll probably get some satisfaction from this, as a second-long animation of him screaming pops up in the corner after each successful hit.

The third game is based on Magma Diver, where Asuka had to take Unit 02 deep into a volcano to extract an Angel. 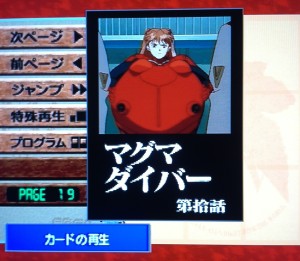 A digital card showing Asuka in her diving suit

Here, you guide Unit 02 to the bottom of the volcano, without touching the walls, almost like an Eva-themed Irritating Stick.

The next game is pretty simple. You’re given an end point and you have to choose the best launch point to get there, using the map on the right as a guide. 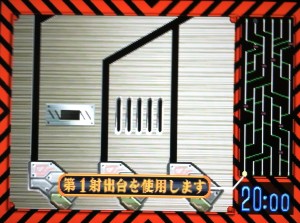 Another favorite of mine is the Pen Pen game. Here, you have to guide Pen Pen to a certain item in Misato’s apartment. To do this, you watch a fluctuating meter and hit the button at the right time so Pen Pen slides to the item. 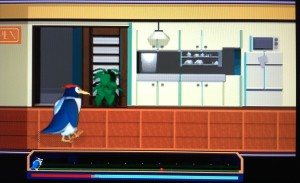 This style of gameplay should be very familiar to anyone who has ever played a Camelot golf game. Simple stuff, but it gets trickier in later stages, once you have various obstacles that speed you up/slow you down to contend with.

The next game is another silly Misato-related one. Here, Misato is drinking, and sends Shinji out for more beer (I think). As Shinji, you walk around the neighborhood, hitting up every vending machine you can.

When you get to a vending machine, you play a slot machine game and try to match three.

Speaking of never winning, the next minigame may be the most difficult. In this one, you’re controlling Unit 01, running to catch up to an Angel. What makes this difficult though, is that you are holding Misato.

You alternate between the D-pad and buttons to keep her balanced in Unit 01’s hand, which is just ridiculously hard. Man, being an Eva pilot is tough.

If you played a lot of the secret slide puzzle in the original Final Fantasy, you may be at an advantage for the next game. However, in this version of the slide puzzle, you aren’t using numbers, but rather Japanese text (mostly kanji).

It’s difficult stuff, made more stressful by the intense music (from the series, of course) and countdown timer.

The final minigame is your typical quiz. It’s all in pretty fast moving Japanese, so unless you’re very fluent in the language, this one is going to be tough. 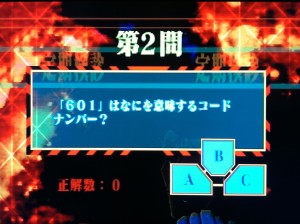 That said, the questions do repeat, and many have numbers, so it’s possible to take notes and bluff your way through.

My personal favorite section of the card library was at the end, with all the manga panels, goofy sketches, and merchandise. 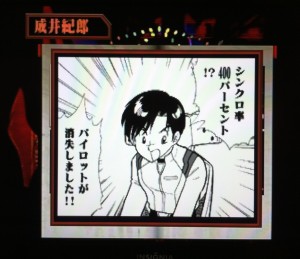 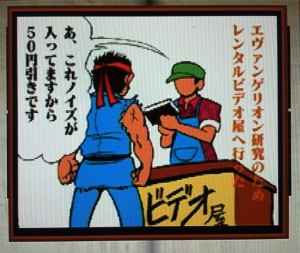 One of the best parts about browsing the merchandise section was finding items that my wife and I owned. 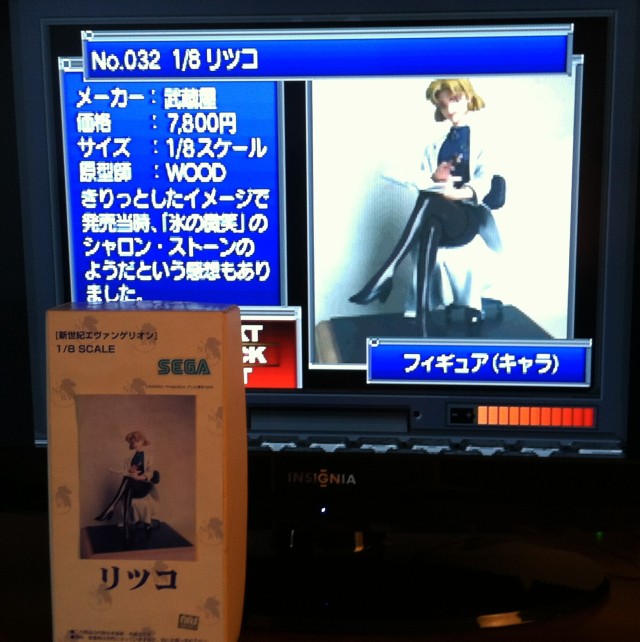 Digital Card Library remains a great pickup for Evangelion fans. The minigames are equal parts hit and miss, but there is a ton to browse through for those not only feeling nostalgia for the series, but for the era of its debut as well. The game can be had for less than $10 shipped in North America, and for far less in Japan (I paid 19 yen for my copy). It’s fairly import-friendly, so if you’re an Evangelion fan with the ability to play Japanese Saturn games, definitely check it out. 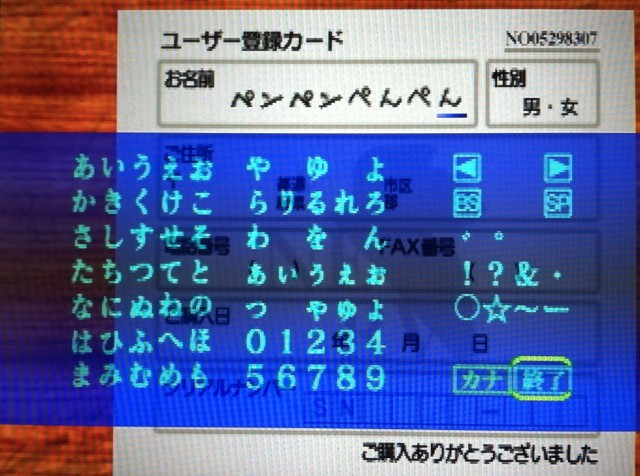 Upon starting a new game, enter your name as “penpenpenpen.” The first two “pens” being in katakana, the second two in hiragana (as shown in this screenshot). You can switch between writing styles using the box in the lower right corner of the screen, to the left of the “end” button. Remember to add the handakuten (circle) to the “he” syllables to change them to “pe.” 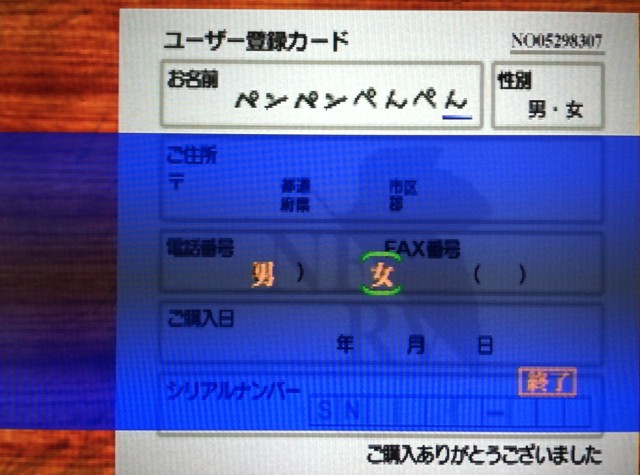 Next select your gender as female. The kanji for female is highlighted above.

If you enter everything correctly, you should now have access to all the cards and games! Have fun!